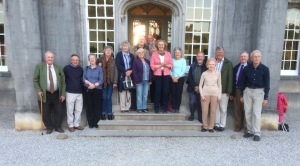 This took place on Wednesday 1st June 2016 with guided tour of Leighton Hall, near Carnforth.  Report to follow.

The 2015 Summer Walk took place in June in the town of Burton -in –Kendal where we were greeted by Mrs Kath Hayhurst. Kath has lived in the town for many years and has had a great interest in its history

Burton -in –Kendal lies mid-way between Lancaster and Kendal and it importance arises from supplying the travelling trade during the 18th and 19th Centuries.

The town lies north to south on land between the marshy west and drier and higher land on the east.

There still remains a selection of grand houses with names like Burton, Mansion, Garnett, Hutton and Manor and are predominately built along the main road in the 17th Century and the list of trades and occupations during this time reflect the needs of the passing stage coach trade. It was obviously a busy and thriving town with a blacksmith, a coach proprietor, beer making, a tannery, a granary, bakery, farms and latterly several banks. Also the many coaching inns provided stabling and accommodation for the visitors.

One of the grandest houses today is Burton House, down on the southerly approach to the town, built by Major Thomas Pearson in 1770 on his return form India . He rose to the rank of Major in the service of the East India Company. Similarly nearby is Manor House built in 1701 for Thomas and Isobel Sill. The stables and coach house were built in the late 18th Century and are now houses.

In the middle of Burton is Market Square where there is a significant cluster of old buildings with historic connections. Here is the Royal Oak , an ancient hostelry which held auction sales, balls and dinners in the 1830’s. Here also the mail coach stopped because there was a post office.

Many of the properties still reflect their original design with some obviously built in the Georgian style and some quaint smaller cottages with neat, tiny windows with steps up to the front door. The variety makes for a fascinating town to pass through, although now many properties look empty and have an un-cared for look. The prosperity began to decline with the coming of the canal in 1819 followed by the arrival of the railway in 1846 and then more recently with the opening of the motorway in 1970.

The church to the north of the town has ancient origins, with evidence of religious remnants of stone crosses held in the church. Unfortunately restoration work prevented us from having access inside.

We are so grateful to Kath Hayhurst for sharing her knowledge and especially for indicating little side turnings and lanes which often held old, humble cottages which have been beautifully restored into handsome modern homes. It was a most enjoyable and interesting visit. 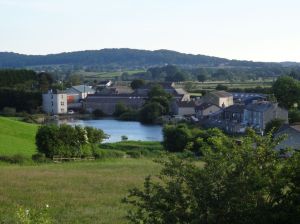 On the 18th June, 2014, Geoff Pegg led a Society group around the village of Holme and Holme Mills.

Until the opening of Holme Mill as a flax spinning mill in 1790, the main industry in the village was agriculture.  Much of the land at that time was owned by the Levens Estate and the Dallam Tower Estate.  Flax spinning provided employment for more than 400 people in its heyday until a fire destroyed much of its capacity.  This led to the conversion of the mill in 1864 to coconut matting production after the property was bought by a retired prison governor from Wakefield called Edward Shepherd.  He put the mill under the management of his son, Francis Shepherd, and his nephew Frederick O’Dwyer, and they built a business which exported matting goods all over the world.  In 1916 Goodacres, of Victoria Docks, London, took over the business and continued trading until the early 1970s when they were making mainly plastic matting at the site.  The mill had a huge impact on the development of the village and during the walk the group heard stories about some of the individuals connected, in one way or another, with the mill.